Feeling brave today, I thought I'd dive into a gearbox! My M21 had developed a fault with the third gear, as I select the gear from second to third, I can feel that it had gone in but on opening up the throttle I then feel the gears sort of sliding together... Trying to pull away, and then suddenly engaging with a harsh clunk, and this happens after I had let the clutch lever out! I had tried all sorts of different changing techniques like holding the gear lever down a little longer as I change the gears, also letting the engine revs die down more, but no such joy.

Luckily I have a spare box to play with, the bench was cleared and the Tilley heater lit up to disperse the cold damp atmosphere in the workshop. The gearbox had been partly opened up before so I knew that my time was not going to be spent having to blow the box apart with dynamite! The box was only £35 quid which I thought was good value and I certainly had my moneys worth of entertainment out of it this afternoon. 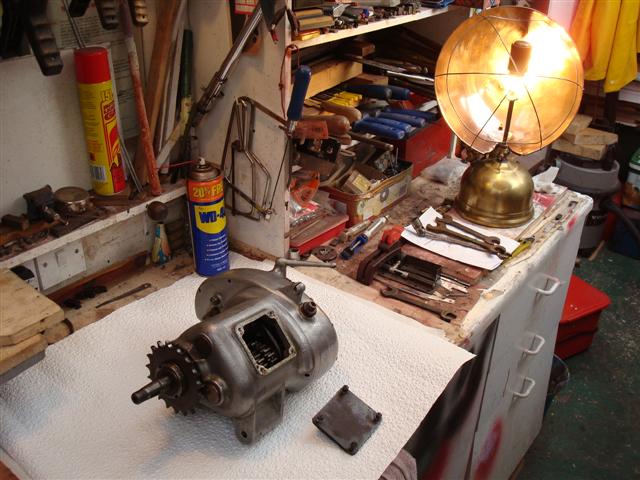 The first glimpse into the terrifying inspection hole reveals the second gear engaged. All looks well inside, no chips or obvious wear on the cogs. Watching the selector move side to side changing the gears was interesting and soon I became much more familiar of what happens in that dark and forbidding place.

The photograph below shows the third gear engaged and this looks a little worn, but remember that I had not ridden the bike with this gearbox fitted, so I don't know what the behavior of it is.

After removing the outer cover and inspecting the ratchet, levers and springs etc, it was time to bravely take the inner cover off, and this pulled out the cluster of gears leaving the forth gear in the back of the box attached to the bearing and sprocket. A close look here at everything, and even with my untrained eye, all seems to be ok. I realised at this point that in future if I should need to work on the gearbox fitted to the bike, I would not need to remove the inner plate along with the guts of the box as there was nothing in this area to adjust, just an inspection would be all that is needed unless anything horrid is visible through the handy inspection cover. Any adjustment to make must be on removal of the outer cover, this is something that I would next look closely at.

Below, the view of the back of box and fourth gear cog.

Looking a little closer now, this is the first and second gear with the selector fork between. I need to ask an expert if the dogs are worn and what the clearances should be. First and second gears seem to work fine and looking at the third and fourth gears  that are in the same condition as the other two, they should also perform in the same smooth manner.

An update will follow concerning the adjustments made under the outer cover.

Now remembering that the previous six photos were taken of the spare gearbox... The following pics are of the gearbox fitted to the bike itself, obviously!

As previously mentioned there is only one place in which to make any sort of adjustment, and this is on the adjustable control link, an arm between the gear selector and gear change mechanism. I found that by adjusting one and two turns either way does not make any difference to the performance of the third gear. It seems obvious when tried, that any sort of adjustment then affects ALL the gears and not the one I'm having problems with. The next job is to put the adjuster back to where it was before and to think about getting some new gears from Draganfly. Probably what I might do is rebuild the spare box and just swap them over when ready.