I was hoping to start off the second page with a perfectly running and oil tight engine, but not to be. The past weekends Round Britain Rally efforts was impressive as far as the bikes performance was concerned. Even though my right leg was well covered in oil and the bike had an equal layer of oil, dust and dead flies, horrible mess.

So today my mate and I set about welding up the crack, I was not looking for a neat job because if the experiment was unsuccessful then at the last resort the barrel would be... Binned! I won another barrel on ebay yesterday for a tenner so I am not short of barrels.

Over the last weekend I can say that the only problems that cropped up was the petrol vapourising due to a very thin heat insulating tufnel spacer. I have a thicker tufnel block that is waiting to be cut to size before fitting, this needs doing soon as the embarrassment of 'machine gun' backfiring is sometimes too much. (Update! This I eventually got done, and what a big difference it has made, A job fully recommended.) Another job that will need doing! The other problem was that the clutch got really awkward this I think was because the push rod needs hardening at both ends. It had worn down surprisingly quick, its easy to blame the poor old cable adjustments.

Time for an update I think as much has happened since my last write up. Well the repair to the barrel was no good so off it came and on with my spare one. I spent a good few hours cleaning off all the grime then time spent on checking valves guides etc. Luckily because both pistons were marked +060 I did a straight swap. The barrel is not in perfect condition it does need a re-sleeve because of a nasty piston gudgeon pin, score marks. I have decided to wait until I bring home the ebay barrel from Scotland before I have any work done.

The clutch rod was swapped with another that I have housed in a spare gearbox, I just hope that this one is hardened at the ends. Must remember to check or re harden it. Apart from checking and adjusting throttle, front brake I also had to make another perforated brass air intake cover, this time with a chain so it don't get lost like the other. I have also made a front number plate. Made a bit of a job for myself as I like to see a hand sign written plate as opposed to the stick on numbers. Pictures coming up later!

I have decided to look for a far rear pannier rack and side pannier bag holders, I've got a bit fed up with the present arrangement and want the bike to look proper. I have also attached an army water bottle and a Bren gun magazine pouch to the front forks. Looks good. Just got to give the bike a good polish up ready for Sundays Lincolnshire Worlds run at Horncastle. Might even do a couple of Landmarks.

At last I have got round to adding the latest photo, this shows the bike all ready to go on the 'Great Northern Quest' a ride out to the Yorkshire Dales reaching Scotland and down to Liverpool. Finishing up at the BSA owners club East midlands camp. The bike with its replaced barrel ran very well indeed. The compression is a bit lower, after the riding season and when the new barrel has been collected, I will then see if a bit more compression can be raised. Note in the picture the new number plate and the brass perforated air intake disc. The latest news concerning panniers is that I have won some on ebay and awaiting delivery.

It is high time for an update... The M21 has now been in my ownership for just over one year and in this time has covered a good ten thousand miles or so. Earlier in my blogg I had explained how the barrel had been giving problems with oil spewing out from just below the valve lifter. I had placed another barrel on but that one was in desperate need of a re-bore or re-sleeve. The bore had a deep gudgeon pin score down one side and the piston was from the previous barrel. I had not checked the clearances on rings or the piston to the side of the barrel clearance. I knew that they were well out, however the bike ran much better than it did before and so I left it as it was and it continued to run nicely for the Summer.

The M21 had this year seen some seven thousand miles covered on the Round Britain Rally which alone was most enjoyable and the bike ran without any serious problem, any small snags I was able to do a roadside fix. I had also covered a few hundred miles to Northern France and round the first world war battlefields. I must admit that I had been filling the oil tank up with some really cheap and nasty 20/50 oil instead of the luxury of Castrol XXL40 that my A10s get.

A couple of mornings ago the bike was started in the usual manner but with very little or no compression, there was no need to use the decompression lever. The mornings have been very cold with a hard frost on the ground. I gather that the metal on the engine was very compacted resulting in a gap in the cylinder head gasket area. I have not been happy with the aluminium cylinder head and am now desperately looking for a cast Iron one. On starting on one particular cold frosty morning the engine gave out a terrible smoke screen leaving me wondering if this was a military ploy in leaving a smoke screen on the battlefield. It would have been very effective! At this point I knew that the engine was crying out for Daddy to fix her and put her right!

So, another barrel was hunted for, and although I had picked up a couple in the year off of ebay, and they were not in too bad condition, only needing a re-sleeve. However only a few weeks ago I managed to get a 'Brand new one' well I say a brand new one... In actual fact the barrel was on standard bore with only just a slight amount of wear. The outside of the barrel was not rusted in any way and I gather that with looking at the alloy cylinder head that came with it.... The barrel and head was from a stationary engine! It is not a problem as the barrel is exactly the same as a motorcycle, The earlier barrels that BSA made had a steel line inserted and is better than the cast iron lining giving a longer use before a re-bore is needed. Only yesterday I had ordered a new standard size piston from Draganfly in Suffolk and it was here this morning. So... I was armed and ready for business.

This afternoon I was in the shed, stripped down the top end to find the badly worn internals...

You can see how the combustion had got passed the rings by how blackened the piston is and it always amazes me how MY piston rings always seem to line themselves up! No wonder I was loosing compression!

The new parts are all ready to go in, I just need to hone the cylinder well and check the clearances on the piston in the cylinder and check ring gaps. I will be making up some gaskets once again and in no time the job will be done and the bike ready for the 2008 season once again. 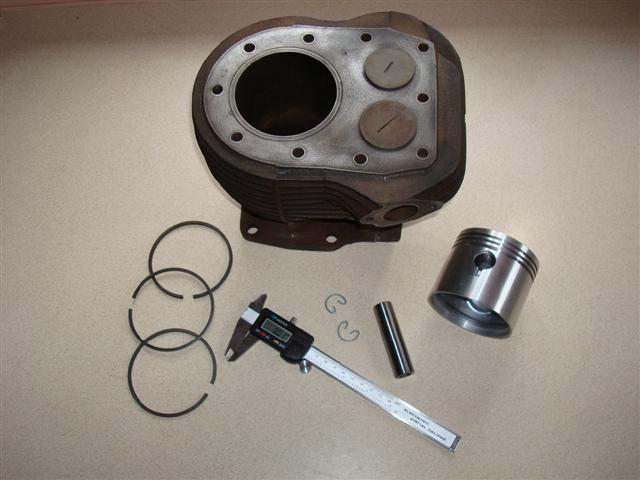 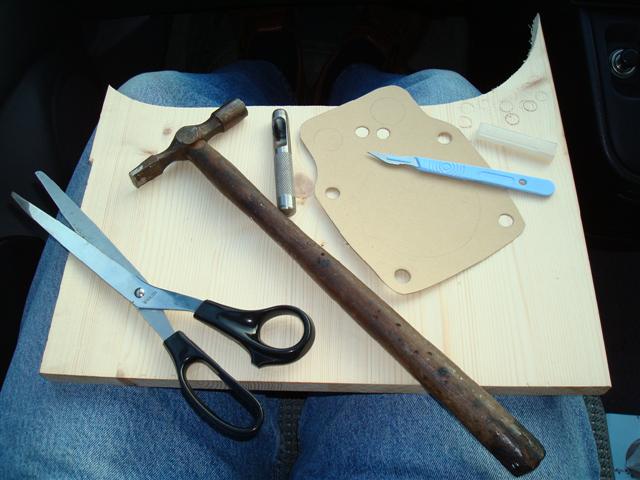 Sitting in the car making Gaskets!

After a fruitless search at the Newark and Notts auto jumble for an Iron head to replace the alloy head, I got my begging cap out to a friend for one. Luckily he had one spare for me, so I have been able to finish off the overhaul of the bikes engine. With only two days to go before Xmas I was able to start the bike once again. The sound was much better than the ringing alloy head, I hope that there will be no more problems with head gaskets. I will have to watch the engine temperature as the Iron heads get hotter and do not dissipate the heat as well as the alloy ones do.

All seems well with the bike and is now running nicely, admittedly I have only done about thirty miles, but I was now frustrated by the problem within the gearbox. So today with my spare gearbox I decided to find out a bit more of how it works.... Take a look at the Gear Box page.

The M21 has been running very well since its new barrel, head & piston etc was fitted, and now that the running in period has been completed there had been no complications appear. The weather has not been hot as such, so I don't know at this stage how the iron head would perform in such conditions, although I am very confident that it will be completely trouble free.

The bike has changed again in its appearance, it now has a few extra goodies fitted to it. I eventually got round to modernising and fitting the back rack to fit the later, slimmer mudguard the bike has, I was then able to fit the side pannier frames and fit an original bum busting uncomfortable pillion seat, hee hee! I had a .50 caliber ammunition box kicking around that I have literally bolted to the frame, this now serves as a very handy and useful top box for knick Knacks, like bum bruise cream! A smiling Lillian who sits Pillion, looking smug as she poses for photograph on a picnic by the Holbeach Marshes Firing range. 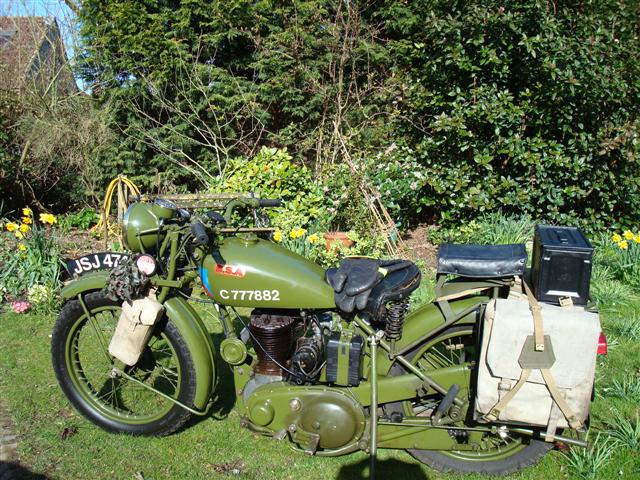 One of the goodies that has been fitted to the bike recently is a long advance retard lever that I luckily picked up in a 50p box of junk. After a good sand blast to remove chrome, brass was revealed and soon polished up. It looks fantastic and looks really the part on the handle bars...

Another lever on the handle bars was changed and that is the opposite side one that operates the choke, although the choke is very very rarely used on this M2,1 I thought that it too would look nice brassed up a bit. See picture above...

A couple more items to tart her up a bit and that is a really nice brass head lamp rim, a kind old fella gave this to me recently, after an exchange of a few beers the rim was also polished and fitted. The guy was selling a lot of his old biking parts and was putting stuff on ebay, and talking of ebay, I spied this really nice original 1955 ammeter. The dial being black and the bezel rim being in brass, I just had to have this to replace my white and chrome one. The result is stunning! Its amazing how such small details can enhance the beauty in an old classic motorcycle. Don't tell the Missus how much I paid for it though... 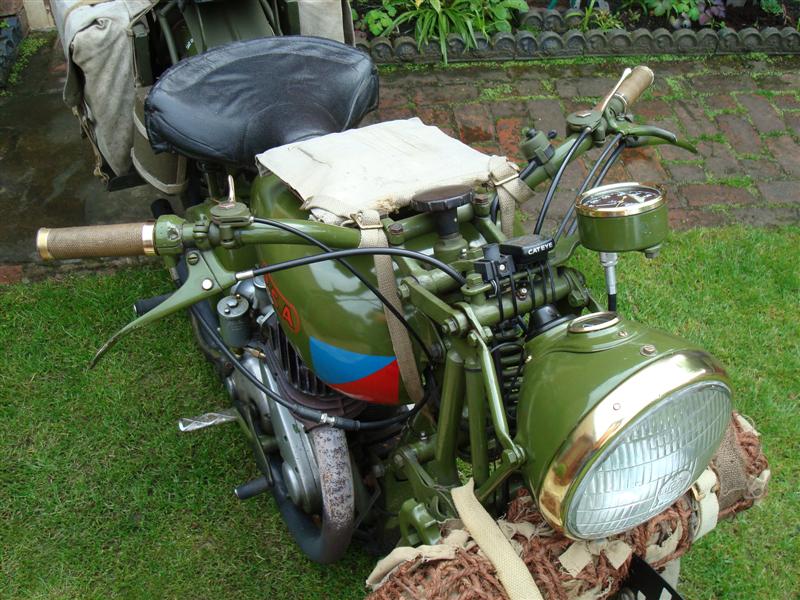 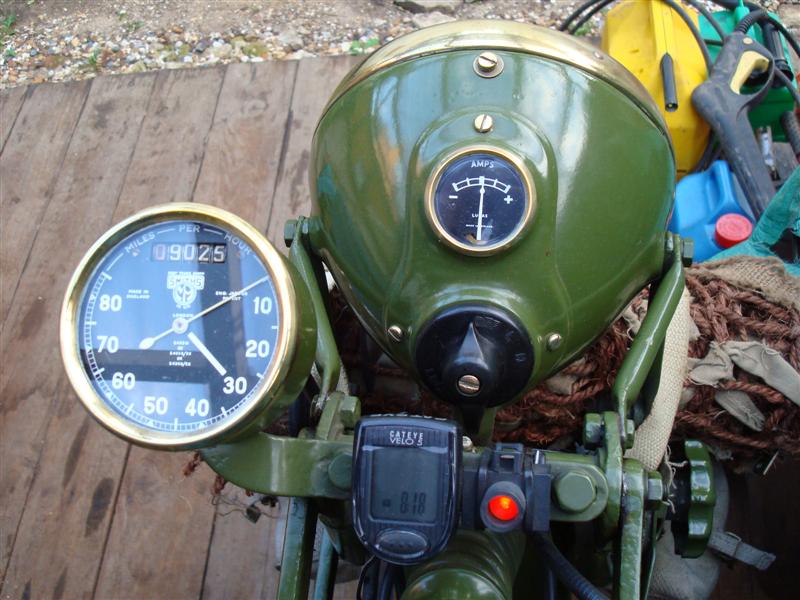 I like to follow what other M20/21 owner do to their bikes and found that some discussion was going on about canvas hand grips that replaced the short supply of rubberised ones that were normally fitted. I had to have a go at making my own because I was not prepared to pay £106 for just ONE hand grip that was sold on ebay a few days earlier. A new detailed page of how I made my own can be found here following this link. The actual £106 hand grip is shown below...

Return to page one